LPC were asked to review and validate the design of Pick ‘n Pay’s new Western Cape DC, though under construction at the time, we were required to identify what racking layout and profiles we would employ, identify and comment on any issues we noted and to superimpose a “vanilla” concept onto the site to show what we would have designed based on European best practice. This would then allow a gap analysis to be carried out and the learnings to be available for future new Distribution Centres.

There were some major factors and assumptions affecting our response to the brief and recognition that some compromises would be needed.

We had to allow for incomplete product master data and make assumptions based on our experience of grocery retailers distribution requirements before we then re-analysed fresh data to identify both an interim requirement and a “final” 2024 need.

We were limited in that the base racking design had to remain due to the spacing of the internal building structure and floor joints and that the sprinkler rational fire design was fixed. 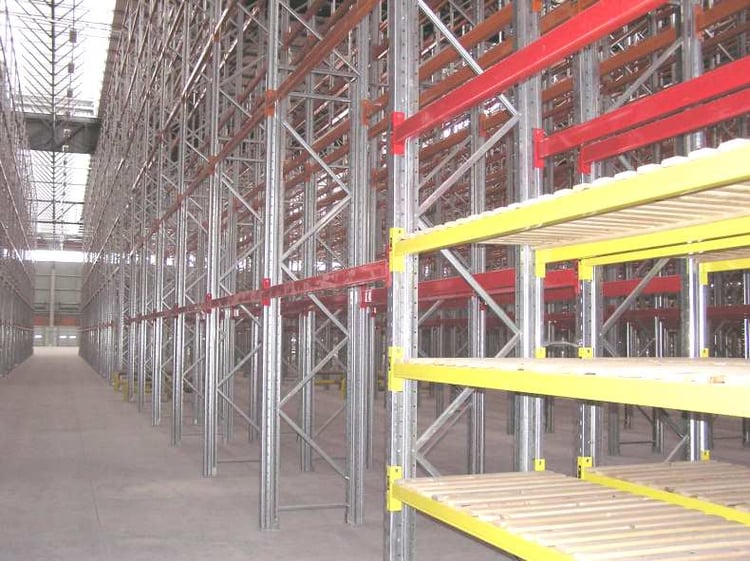 However, as a result of our analysis LPC were able to change the SKUs allocated for storage in Western Cape based on a different ABC classification and identified five revised rack profiles.

These including pick faces with tall ability to queue vehicles, including cars entering the car park, the positioning and ease of trailers docking at the Resource Recovery Unit or the superlinks parking under the canopy to be unloaded and the depths of the yards.

For the final element, LPC’s “vanilla” concept saw a differing dimensioned building which was longer but less deep with proportionally less despatch marshalling, but with greater yard space for easier manoeuvring and reversing of the inbound superlink vehicles and greater staging for despatch vehicles especially the second trailers to allow for a longer picking / loading period during the day. Internally the building “grid” was different allowing for a more optimal aisle width and increased flexibility to employ other racking layouts.

Using the LPC defined racking layout SKUs were allocated to the locations by group, volume throughput and weight for optimal picking and we provided the data for the pallet location co-ordinates to be used in SAP Warehouse Manager. Whilst not involved in the project management we were asked to snag the building operationally and logistically and snag and assist in the sign off of the racking.