Following on from their continuing growth B&M were looking to open a Southern DC to support their Southern Stores. A site had been identified and LPC were initially retained to carry out a validation of the proposals for the site prior to submission of planning applications by the developer.  The high level brief was to validate the requirement for a 1 million square foot warehouse with consideration to automation.

LPC reviewed the data requirements from the existing DCs which were then extrapolated for the expected Southern dependency and looked at the options for the proposed 1millon square foot facility.

Due to the business philosophy stock per SKU could vary from 1 pallet to many pallets with a large number in the latter bracket and with high average stock per SKU. Options considered therefore varied from basic conventional storage, wide aisle adjustable pallet racking to automated high bay with shuttle storage and utilising pick tunnels for the fastest moving SKUs.

During the course of reviewing the options it became clear that an automated option was not going to be financially viable with the building and site sizes that were planned.

The focus then changed from a validation exercise to providing a concept design for a more detailed solution to allow for the developers to progress with the planning approval process and provide detailed development costs The concept options investigated  were  standard wide aisle APR which could be augmented by some carton live storage to cater for the slower moving SKUs  with less depth of stock and also for  the temperature controlled chambers.  Also investigated were deep storage types such as push back, drive in, double deep, block stack and shuttle racking. The Shuttle or mole type storage was recommended because it provides: 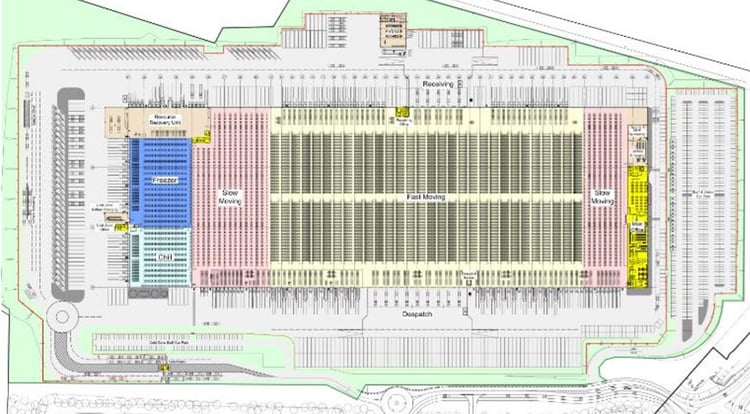 The remainder of the facility was conceptualised around the storage solution and vehicle requirements and included a one way route for HGVs around the site. The ancillary facilities included: